This post is very last minute and considering I did not write a post for March, so I am trying to make up for it by writing one for this month. Since Easter Sunday has already come and gone, I thought it best to reflect on what I have learned through Lent which I decided take an active part in for the first time. For Lent, I decided to give up binge watching Crunchyroll and Funimation as well Netflix (unless I watching it with my Mom) and in turn would give the time over to developing consistency in reading my Bible or other activities that didn’t involve watching a screen. It worked to a degree, however I ended up substituting my craving for video entertainment with Youtube which did have an impact on my intended purpose for Lent. Regardless it still was step in right direction and I learned a few things as I read through my Lent and Easter Reading Plan that I was able to access via BibleGateway.com.

As I read through various scripture passages about the significance of Jesus’ sacrifice, I could not help but compare what I had seen in My Hero Academia. There was a scene that stood out to me as I was watching the first season back the summer of last year which involved the main character Izuku Midoriya and his classmate Katsuki Bakugou. It’s shown to the audience that Bakugou has been bullying and belittling Midoriya for years nicknaming him Deku, an alternate reading of his first name which literally means “one who can’t do anything.” We see that he puts down Midoriya every chance he gets and mocks the very idea that he could ever become a professional hero.

This builds to the moment in the second episode where Midoriya sees Bakugou in the clutches of the fluid villain that All Might rescued him from earlier. When he recognizes that his classmate is in danger, Midoriya’s first instinct was to run in and try to save him. In that instant the insults did not matter, the vandalism of his hero observation notebook did not matter, even the years of verbal and emotional abuse did not matter. What mattered was that Katsuki Bakugou’s life was in the balance and that he had to do something. Izuku Midoriya best illustrates this when he says, “Kacchan, I couldn’t just stand there and watch you die.”

Even though  he had every right to hate Bakugou for terrible things that he did, Midoriya did not want to see him die. In the same way God couldn’t just stand by and watch us die in permanent separation from Him, even if we are at fault. Romans 5:6-8 describes this best: 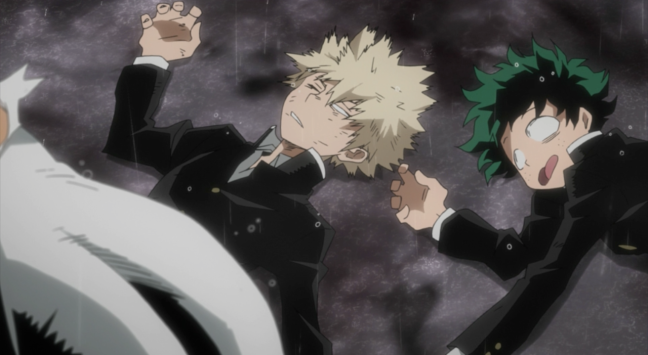 Like Katsuki Bakugou, we think we were powerful and that we can make it on our own. However, the truth is we are powerless because we are trapped by the suffocating power of sin which also makes us enemies with God. Like Izuku Midoriya, Jesus Christ was willing sacrifice himself so we could be saved from the power of sin if we accept the gift of life that He gives us. That is agape, that is unconditional love.